Congratulations to Lili Wan, Wei Sun, & co-authors on their article in Nature Catalysis 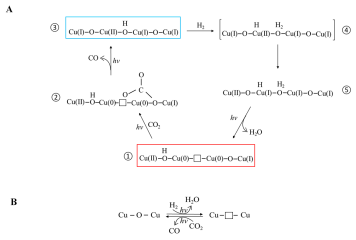 A long-standing challenge in the field of CO2 utilization is how to stabilize Cu2O, an earth-abundant, non-toxic, low-cost (photo)catalyst that can facilitate reduction of CO2 to CO against the irreversible redox disproportionation Cu2O → Cu + CuO, responsible for its instability.

Lili Wan and Wei Sun and coworkers in the Ozin group have solved this problem as reported in their Nature Catalysis paper, by modifying the surface of Cu2O nanocubes with a mixed valence surface frustrated Lewis pair (SFLP), Cu(I,II) ●● OH, which serves to eliminate the redox disproportionation. As depicted in the illustration, H2 undergoes heterolytic dissociation on the SFLP, water is eliminated to create an [O] vacancy and Cu(I) is reduced to Cu(0). Adsorption of CO2 at the [O] vacancy site drives the conversion to CO thereby completing the photocatalytic RWGS reaction cycle

This entry was posted in Uncategorized. Bookmark the permalink.